“Read about the lemon peel & it pains me to hear about these facts & proves that the drug companies would rather profit on our pains & suffering than educate us on alternative medicines & natural remedies,” reads the beginning of the long post which claims lemon peels are 10,000 times stronger than chemotherapy when treating cancer cells.

In an emotion-ridden attempt to prove the authenticity of the claim, some part of the opening text in the post says, “feel sorry for those dead & gone that couldn’t afford or get hold of the chemo or whatever medicines they prescribe, and didn’t know about these facts, thank goodness for social media”.

Claims on Facebook that lemon peels are a better cure for cancer than chemotherapy (Left, centre, right) (Source: Facebook)

TheCable used CrowdTangle, an open-source investigation tool from Meta, and determined that the post has been on Facebook since December 2012. It was posted by a group named, Indians in Leicester with 1,000 followers and 996 likes. The page was created in July 2010. 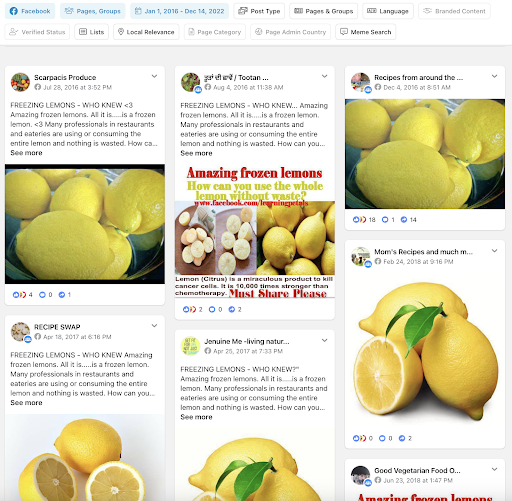 Checks by TheCable revealed that since 2012, the long post had been reposted frequently on several online platforms for about a decade.

Search results of Facebook posts show the claim has been shared far back as 2010 (source: CrowdTangle)

A copy of the post by annabarnes69, a biology graduate who introduced the post with the caption “cancer killer”, appeared on Instagram on July 12, 2022. It only received 16 likes. 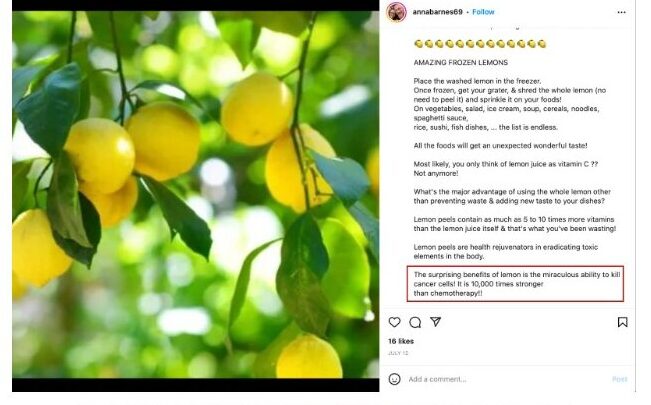 An extensive keyword tweet search revealed that the post was also shared on Twitter as far back as January 2018, by a user named Kwanele Asante, with the username @breastlessAfrik. According to the account bio, the user is a breast cancer survivor who has been declared NED – no evidence of disease, by her medical doctor. 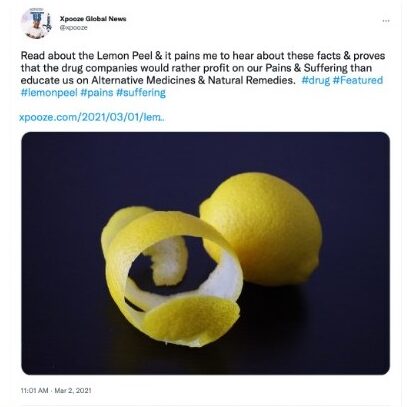 Further online investigations led to a publication published in 2013 by Hope4Cancer, a non-governmental organization offering alternative therapy to strengthen and heal cancer patients. The report by Subrata Chakravarty, PhD, was titled “Lemons and Cancer: Is Lemon a Cancer Cure?” 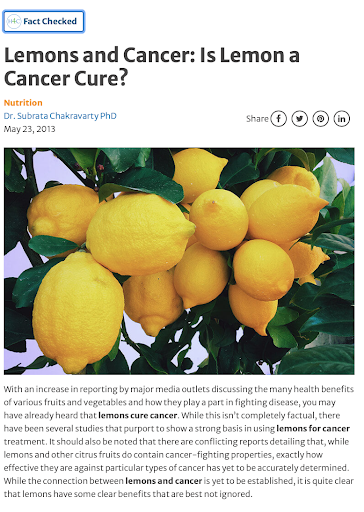 Excerpts from an article by Chakravarty on the benefits of lemons in curing cancer (source: hope4cancer.com)

Are lemons 10,000 times more effective than chemotherapy in cancer treatment?

Chakravarty is a researcher with dozens of peer-reviewed papers. He earned his M.S./PhD degrees from the Indian Agricultural Research Institute and completed a second PhD in medicinal chemistry from Stony Brook University in the United States.

His report highlights conflicting reports purporting that lemons can treat cancer.  However, their effectiveness is questionable.

The report admits that lemons and other citrus fruits contain cancer-fighting properties, but it is yet to be accurately determined how effective they are against specific types of cancer.

Aside from making a case for lemon extract and its capability to destroy some malignant cells, the alternative medicine platform points to some studies claiming that lemons can destroy cancer much more effectively than chemotherapy and more safely and healthily.

However, Hope4Cancer disagrees that lemons are 10,000 times better than chemotherapy. The author could not find any authoritative scientific work that established that as a fact, adding that the statement is unscientific and unfounded.

In 2015, the website added an editor’s note after being inundated with questions from readers asking if lemons can treat cancer. The footnote says the article only describes the health benefits of lemons and the fact that they could be an excellent addition to an anti-cancer diet.

It further adds a disclaimer, discouraging cancer patients from using nutritional measures as the only tool against the disease. It distances itself from the frozen lemon treatment, adding that there is no such thing.

False claim makes it to India

In India, the social media post was widely circulated on WhatsApp, the popular instant messaging app.

In 2022, at least two fact-checking platforms in India – Boomlive and Thehindu debunked the claim, tagging it false. Also, Vishvasnews, an Indian publication, ran the fact-check in 2019 and concluded that the claim was false.

What do experts have to say?

The National Academies, a non-profit institution that provides scientific advice on pressing world challenges, debunked the central claim in the circulating post in a report published in February 2019.

According to the report, the idea that lemons could treat cancer is mainly based on a molecule called limonene, usually found in the oil in lemon peels and other citrus fruits. It also mentioned that studies are ongoing to test the potency of limonene when treating cancer patients. However, the report says there is no consistent evidence that people with cancer who consume limonene either in supplement form or by eating citrus fruits get better or are more likely to be cured.

TheCable spoke with Dapo Agunbiade, a medical doctor, to confirm if there is any recent research to reinforce the effect of lemon peel on cancer treatment.

In his response, Agunbiade said, “in medicine, the dosage is everything”, adding that the dose-effect relationship of modified flavonoids in citrus peel is still under investigation.

“There’s a difference between the effect of a citrus-peel extract on a tumour inside a petri-dish and the effect of that extract when introduced into a living human system,” he said.

Osunsanya Olajumoke, a nutritionist and founder of Khairo Diet Clinic, told TheCable that many would have been cured of the disease if the claim that lemons cure cancer were true.

The dietician also mentioned that a laboratory review and animal studies showed that D-limonene and a few other compounds found in lemon and other citrus peels kill mutated cells and prevent the growth of tumours.

She added that the antioxidants in lemon had been shown to boost immune cells, reduce the risk of cancer and enhance the body’s ability to fight off cancer.

However,  no clinical trial shows the effectiveness in humans or that these compounds are 10,000 stronger than chemotherapy.

Investigations reveal that the misleading claim must have emerged,  and is being strengthened by some ongoing studies suggesting that limonene can kill mutated cells and prevent the growth of tumours in laboratory dishes.

This article was produced with mentorship from the African Academy for Open Source Investigations (AAOSI), to tackle disinformation that undermines our democracies, as part of an initiative by the International Centre for Journalists (ICFJ) and Code for Africa (CfA). Visit https://disinfo.africa/ for more information. 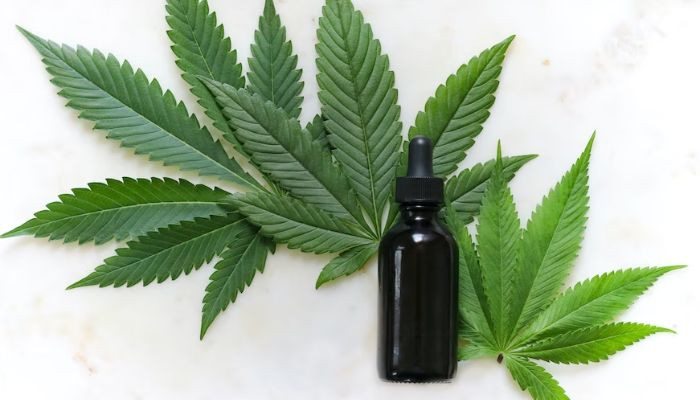