Eleanor Cole, Ph.D., demonstrates the treatment on trial participant Deirdre Lehman in May 2019 at the Stanford Brain Stimulation Lab.

Eleanor Cole, Ph.D., demonstrates the treatment on trial participant Deirdre Lehman in May 2019 at the Stanford Brain Stimulation Lab.

After 40 years of fighting debilitating depression, Emma was on the brink.

“I was suicidal,” said Emma, a 59-year-old Bay Area resident. NPR is not using her full name at her request because of the stigma of mental illness. “I was going to die.”

Over the years, Emma sat through hours of talk therapy and tried numerous anti-depression medications “to have a semblance of normalcy.” And yet she was consumed by relentless fatigue, insomnia and chronic nausea.

Depression is the world’s leading cause of disability, partly because treatment options often result in numerous side effects or patients do not respond at all. And there are many people who never seek treatment because mental illness can carry heavy stigma and discrimination. Studies show untreated depression can lead to suicide.

Three years ago, Emma’s psychiatrist urged her to enroll in a study at Stanford University School of Medicine designed for people who had run out of options. On her first day, scientists took an MRI scan to determine the best possible location to deliver electrical pulses to her brain. Then for a 10 minute block every hour for 10 hours a day for five consecutive days, Emma sat in a chair while a magnetic field stimulated her brain.

At the end of the first day, an unfamiliar calm settled over Emma. Even when her partner picked her up to drive home, she stayed relaxed. “I’m usually hysterical,” she said. “All the time I’m grabbing things. I’m yelling, you know, ‘Did you see those lights?’ And while I rode home that first night I just looked out the window and I enjoyed the ride.”

The remedy was a new type of repetitive transcranial magnetic stimulation (rTMS) called “Stanford neuromodulation therapy.” By adding imaging technology to the treatment and upping the dose of rTMS, scientists have developed an approach that’s more effective and works more than eight times faster than the current approved treatment.

A coil placed on top of Emma’s head created a magnetic field that sent electric pulses through her skull to tickle the surface of her brain. She says it felt like a woodpecker tapping on her skull every 15 seconds. The electrical current is directed at the prefrontal cortex, which is the part of the brain that plans, dreams and controls our emotions.

“It’s an area thought to be underactive in depression,” said Nolan Williams, a psychiatrist and rTMS researcher at Stanford. “We send a signal for the system to not only turn on, but to stay on and remember to stay on.”

Williams says pumping up the prefrontal cortex helps turn down other areas of the brain that stimulate fear and anxiety. That’s the basic premise of rTMS: Electrical impulses are used to balance out erratic brain activity. As a result, people feel less depressed and more in control. All of this holds true in the new treatment — it just works faster.

A recent randomized control trial, published in The American Journal of Psychiatry, shows impressive results are possible in five days of treatment or less. Almost 80% of patients crossed into remission — meaning they were symptom-free within a month. This is compared to about 13% of people who received the placebo treatment.

For the control group, the researchers disguised the treatment with a magnetic coil that mimicked the actual treatment. Neither the scientist administering the procedure nor the patients knew if they were receiving the real or sham treatment. Patients did not report any serious side effects. The most common complaint was a light headache.

Stanford’s new delivery system may even outperform electroconvulsive therapy, which is the most popular form of brain stimulation for depression, but while quicker, it requires general anesthesia.

“This study not only showed some of the best remission rates we’ve ever seen in depression,” said Shan Siddiqi, a Harvard psychiatrist not connected to the study, “but also managed to do that in people who had already failed multiple other treatments.”

Siddiqi also said the study’s small sample size, which is only 29 patients, is not cause for concern.

“Often, a clinical trial will be terminated early [according to pre-specified criteria] because the treatment is so effective that it would be unethical to continue giving people placebo,” said Siddiqi. “That’s what happened here. They’d originally planned to recruit a much larger sample, but the interim analysis was definitive.”

Nolan Williams demonstrates the magnetic brain stimulation therapy he and his colleagues developed, on Deirdre Lehman, a participant in a previous study of the treatment.

Nolan Williams demonstrates the magnetic brain stimulation therapy he and his colleagues developed, on Deirdre Lehman, a participant in a previous study of the treatment.

Mark George, a psychiatrist and neurologist at the Medical University of South Carolina, agrees. He points to other similarly sized trials for depression treatments like ketamine, a version of which is now FDA-approved.

He says the new rTMS approach could be a game changer because it’s both more precise and kicks in faster than older versions. George pioneered an rTMS treatment that was approved by the federal Food and Drug Administration for depression in 2008. Studies show that it produces a near total loss of symptoms in about a third of patients; another third feel somewhat better and another third do not respond at all. But the main problem with the original treatment is that it takes six weeks, which is a long time for a patient in the midst of a crisis.

“This study shows that you can speed it all up and that you can add treatments in a given day and it works,” said George.

The shorter treatment will increase access for a lot of people who cannot get six weeks off work or cover child care for that long.

“The more exciting applications, however, are due to the rapidity,” said George. “These people [the patients] got unsuicidal and undepressed within a week. Those patients are just clogging up our emergency rooms, our psych hospitals. And we really don’t have good treatments for acute suicidality.”

After 45 years of depression and numerous failed attempts to medicate his illness, Tommy Van Brocklin, a civil engineer, says he didn’t see a way out.

“The past couple of years I just started crying a lot,” he said. “I was just a real emotional wreck.”

So last September, Van Brocklin flew across the country from his home in Tennessee to Stanford, where he underwent the new rTMS treatment for a single five-day treatment. Almost immediately he started feeling more optimistic and sleeping longer and deeper.

“I wake up now and I want to come to work, whereas before I’d rather stick a sharp stick in my eye,” said Van Brocklin. “I have not had any depressed days since my treatment.”

He is hopeful the changes stick. More larger studies are needed to verify how long the new rTMS treatment will last.

At least for Emma, the woman who received Stanford’s treatment three years ago in a similar study, the results are holding. She says she still has ups and downs but “it’s an entirely different me dealing with it.”

Stanford’s neuromodulation therapy could be widely available by the end of this year — that’s when scientists are hoping FDA clearance comes through. The technology is licensed to Magnus Medical, a startup with plans to commercialize it

Williams, the lead researcher at Stanford, says he’s optimistic insurance companies will eventually cover the new delivery model because it works in a matter of days, so it’s likely more cost-effective than a conventional 6 week rTMS regimen. Major insurance companies and Medicare currently cover rTMS, though some plans require patients to demonstrate that they’ve exhausted other treatment options.

The next step is studying how rTMS may improve other mental health disorders like addiction and traumatic brain injury.

“This study is hopefully just the tip of the iceberg,” said Siddiqi. “I think we’re finally on the verge of a paradigm shift in how we think about psychiatric treatment, where we’ll supplement the conventional chemical imbalance and psychological conflict models with a new brain circuit model.”

In other words, electricity in the form of rTMS could become one of the vital tools used to help people with mental illness.

Mon Feb 7 , 2022
Cannabidiol (CBD) is a style of cannabinoid, a chemical that is by natural means derived from cannabis (cannabis and hemp) crops. In contrast to tetrahydrocannabinol (THC), CBD does not result in the euphoria or “high” emotion that is involved with cannabis. CBD has attained popularity in latest many years as […] 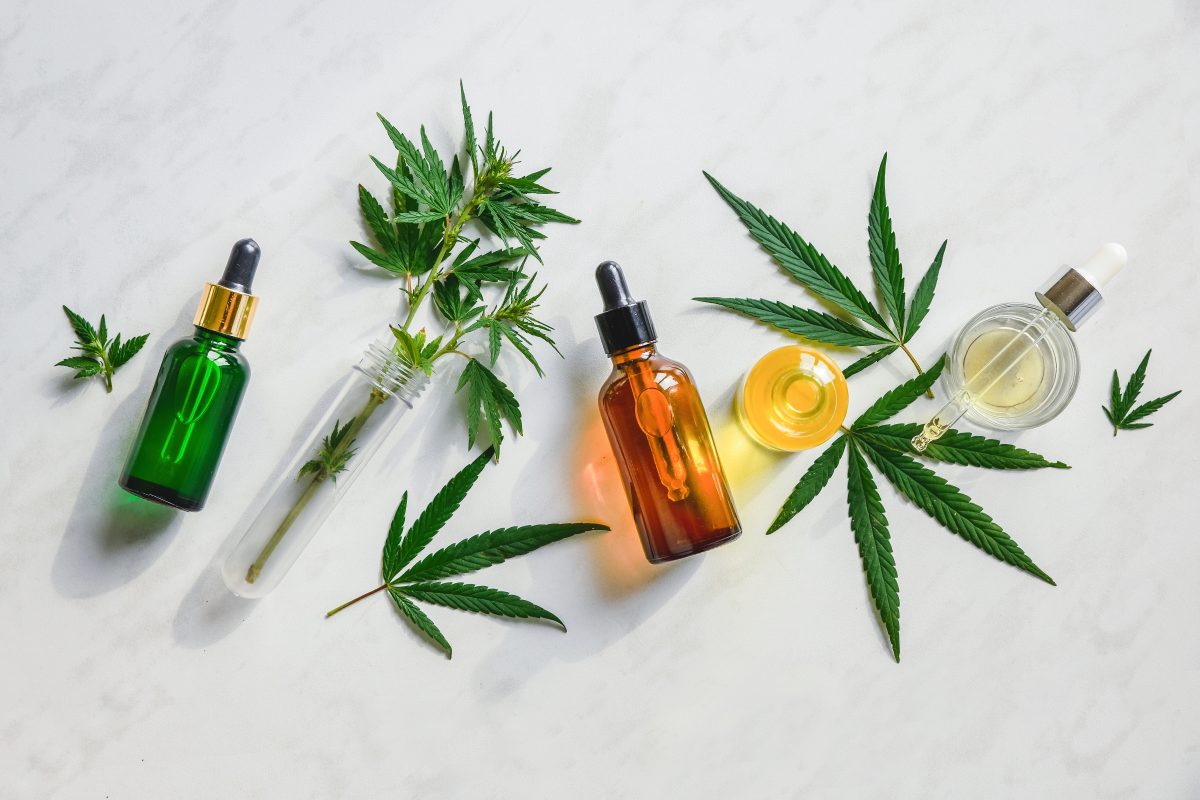